I need to disappear. I don’t like train stations. Too crowded. But the train station is good camouflage.  Everybody is wrapped up in their personal missions. Not that I have a problem with selfishness, I reside in that mind-space most days. But, for some reason it’s worse around the holidays and train stations emphasis it.

I look busy “shopping” at a kitsch kart. Snow globes. I casually inspect one. ‘Snow’ falls and lands on various letters of the Hollywoodland sign. “Does it snow in L.A.?” I wonder out loud.

December 24th, 1957. The busiest day of the year here. I should be able to keep under the radar. “I’ve never understood the appeal of these things.” I put the globe down and noticed the L.A. Times. ‘Christmas Killer at Large; searchers dragnet southwest’. “Dammit.” I guess it is time to move on.

The rental car is generic enough.  So is the desert at night. There is very little traffic out here on Christmas Eve.  I could use a meal and a cup ‘o joe. The little 24-hour diner will do nicely. It’s a dingy little place with just a few patrons. A handful of truck drivers a long way from home. The few strings of Christmas lights and dry tree are the frosting on this shit cake.

A third string beauty school dropout behind the counter hangs orders on the carousel.  The thug of a short order cook scrambles eggs and flips burgers on the same greasy fryer. I assume the coffee is a day old. I’m wrong and pleasantly surprised. I could do without the Bing Crosby though.

She shimmies up to my dark booth like a secret agent. I jump a little. Maybe it’s the caffeine on an empty stomach. Maybe it isn’t.

“Sorry, Sugar. I didn’t mean to startle you. You want more than coffee?” She includes a wink. Nicely done.

“Yeah, you got a steak and mashed with gravy?”

“And the evening paper?”

A couple of truckers walk in and distract her. But only for a moment. “You fellas need coffee?”

A few nods of approval, a couple quick fill-ups, and she has that newspaper on my table.  Las Vegas Sun.  “Christmas Killer Search widens.”

I jump again as my waitress drops the plate in front of me.

She sits across from me. That face. I could eat it up.  “You have a friendly face. Can I make a confession?”

She jumps up. “Hold that thought, Hon.”

Her 6th Sense is sharp. She grabs dinner plates before the cook rings the bell. She quickly disperses them at two different tables. An elderly couple pay for their meals and leave.

She glides smoothly back into the booth. Flashes a smile. “Shoot, Sugar.”

Her name tag says Janice.  Funny, I thought she would be a Cindy or Marylin. I don’t know why. “Well, Janice, it’s like this. . ..

The snow nearly covered the windows of the small village. Christmas lights glowed half submerged in fresh drifts. The darkness was pervasive. Little puffs of smoke rose from the buildings.  Otherwise, the place seemed deserted.  It was, except for one small office. The man looked concerned and frustrated as he flipped large pages from the ledger back and forth.

“That doesn’t make any sense.”

He flipped back several more pages and paused. “Oh my God” he nearly whispered.

He jumped up and his small chair flew back and smashed into the wall behind. “NO! No, that means. . .”

He grabbed the phone off the wall and dialed furiously. “C’mon, c’mon, be there.”

“Don’t let him leave. I’m coming over. I just found something that, well, I have to talk to him, NOW!”

Even with the heavy snow falling, he didn’t bother putting on a heavy coat. He only had to cross the square to enter the largest of the village buildings. No others were present to hear him cursing under his breath. The big man had some tough questions coming.  And the answers had better be satisfactory.

Marcia jumped from her seat as he barged in. “You can’t just go in...”

He held up a single index finger. “No, MARCIA!”

But he was already past her and through the heavy factory doors.  The factory floor was deserted. This was not unusual for the time of year. But at certain times it was a marvel of efficiency and production. Just the scale of things was impressive. So many toys.

That’s when he heard the sound. Just slight. But enough that he heard it. He followed his ears and then, to his horror, his nose. “Ugh!” He covered his face. The foul stench almost knocked him over.

Then he saw what he hoped had to be a lie. The small cages.  All in rows. Each with a single occupant. Tiny arms chained to a single iron anchor in the center of each cage. Heads hung low, eyes bloodshot and half open. The large, pointed, ears battered and dirty.

He grabbed the closest object to him. A hammer. Then, with resolve, he stood and forced himself to cross the floor to the largest door. The sign, in bright red, said “K.K.” The light under the door said he was in.

How could they? How long had this been going on? Well, it had to stop. NOW.

“The last thing I remember is dropping the bloody hammer as I ran from that place.”

I hadn’t bothered to look at my audience as I recalled the horror of the last week. I look up from my hands. Janice has a similar look of horror on her face. For that I am sorry. Such a pretty face.

It must have been too much for her. She looks as upset as I had been that night.

I slide out of the booth, quickly, and look for a back door. The other patrons are taking notice. Unhappily.  There is screaming involved. I see an emergency exit and start to go that way but the large, greasy, cook, with a bloody cleaver blocks my way.

Bright lights flood the diner as a large number of vehicles suddenly arrive. Several have emergency lights and sirens blaring. On the floor, next to the dead Christmas tree, lies an older newspaper. I am all too familiar with its headline.

Lilies in the Snow

***** The howling wind was deafening, deadly. I was warm, somehow. It wasn’t possible. I was sure I was dead. No, there definitely was a f... 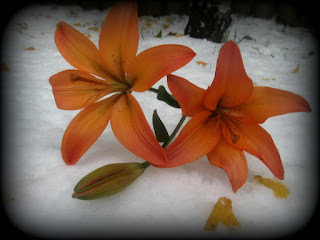